FCCSA members can take pride in the well-established and well-maintained landscaping throughout the Association.

Community Maintenance oversees the maintenance and operations of all Association owned assets, except landscaping and irrigation. The list below includes all of the major asset categories maintained by the Operations department. Each link provides information about the location and maintenance standards of FCCSA assets. In addition, the links describe other entities to contact if the maintenance of a particular asset is not handled by FCCSA.

The Operations department is also responsible for creating and maintaining FCCSA’s community-wide GIS system. The link below will open the start up page for the Association’s interactive GIS mapping system called LUKE. With LUKE, you can report any maintenance requests directly to FCCSA. Luke additionally provide follow-up services to keep you informed on the status of your request. The location services on your device will pinpoint your request. You can also provide a description of the item and photos can be uploaded to support your description. The app works with iPhone or Android.

As FCCSA has seen an increase in community members using the LUKE app, some maintenance requests have been coming in that fall under the purview of city maintenance. A general guideline for determining if the asset requires FCCSA maintenance is if it is, or is in, an FCCSA pool, park, landscape reserve, or lake. Also, any black ornamental street lights with an alpha-numeric ID code belong to FCCSA. If there is a six digit ID code, that light is maintained by CenterPoint Energy. Those outages can be reported here: http://gis.centerpointenergy.com/outagetracker/. All other non-utility company issues can be reported to the city where the problem exists. For Sugar Land, you can use the MySugarLand app, available for download at http://www.sugarlandtx.gov/index.aspx?NID=80. For Missouri City, use SeeClickFix, available at http://www.seeclickfix.com/missouri-city. FCCSA looks forward to working with the residents through the use of the LUKE app to keep the community looking its best.

There are many reasons to trim tree branches, including health, safety, aesthetics, or growth restriction. Determining which entity is responsible for trimming trees and the scope of work involved can be done by applying the following information. Trees located on FCCSA property are owned by FCCSA and are maintained by FCCSA. Trees located on the homeowner’s property are owned by the homeowner and are maintained by the homeowner, including the street trees which are located between the street and the sidewalk. These trees are located in the city right-of-way easement, which means the city has the right to access this area. It does not mean the city or the association has the responsibility to maintain the street trees.

FCCSA has a two-fold street trimming program in place, one for FCCSA owned trees and one for homeowner owned trees. Trees located on FCCSA property are trimmed by FCCSA contractors to meet the requirements put in place by the tree ordinances in each city, and to remove deadwood over two inches in diameter. FCCSA also has a residential street tree trimming program in place to trim street trees to meet the clearance requirements over the street and sidewalk set forth by the city’s tree ordinance. This service is done to the best of FCCSA ability.

Residents can choose to opt out of the residential tree trimming program and trim the trees themselves. Please contact David Pella at (281) 634-9566 or davidp@firstcolony.org with any questions.

The City of Sugar Land performs inspections and marks trees that do not meet the ordinance for tree clearance over the street.  FCCSA has a residential street tree trimming program (see above) in place to keep these trees in compliance with the city.  However, to avoid any discrepancies regarding which limbs need to be removed, the contractor has been asked not to remove any large limbs that will change the shape of the tree unless the city marks them as out of compliance.  FCCSA will instruct the contractor to go in those areas and remove the large limbs marked by the City of Sugar Land as a part of the residential street tree trimming program.  No FCCSA member should have to pay any additional funds for this work unless they have opted out of the program.

The guidelines for the City of Missouri City can be found at: https://www.missouricitytx.gov/481/Tree-Trimming

The ordinance for the City of Sugar Land can be found at: http://bit.ly/1d8TH6b

All FCCSA streetlights are inspected on a bi-monthly basis. Under normal circumstances most repairs are complete within two (2) weeks however, long periods of inclement weather and major electrical repairs may extend the completion date past two (2) weeks.

FCCSA Streetlight
All FCCSA maintained streetlights have an alpha-numeric label. For repairs please contact FCCSA at (281) 634-9500 or you can use the LUKE app to report the problem. 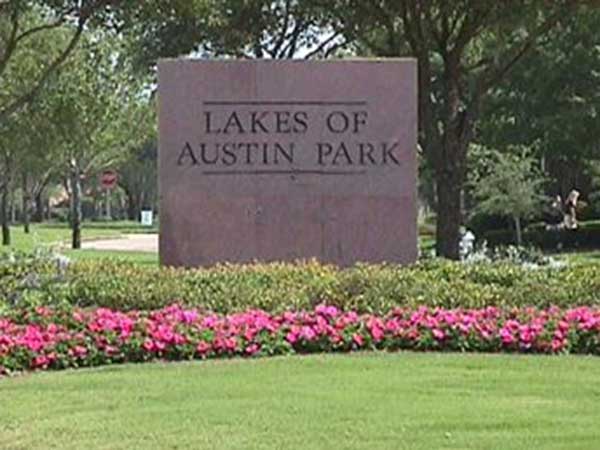 FCCSA maintains approximately 100 monument signs and 250 landscape lights that highlight the entrances to FCCSA neighborhoods. The monument signs are inspected quarterly, and the landscape lights are inspected bi-monthly. Typical repairs on monument lighting should occur within two weeks of inspection. However, long periods of inclement weather and major electrical repairs may extend the completion date past two weeks. To report any maintenance related problems with monument signs and lighting please contact FCCSA at (281) 634-9500.
FCCSA maintains many different areas and styles of fencing throughout the community. However, the majority of fence maintenance inside First Colony is the responsibility of the homeowners. The Association only owns fencing that is inside FCCSA reserves and does not enclose a homeowner’s property. FCCSA does perform fence maintenance on the following boulevards when they are adjacent to FCCSA neighborhoods.

Fence Maintenance Policy
The repair and maintenance of concrete sidewalks throughout First Colony is the responsibility of many different parties. When reporting problems with broken and/or unlevel sidewalks, it is often difficult to determine who should perform the repair.

Below describes the appropriate entity to contact about repairs on a specific area of sidewalk.

First Colony Community Services Association- FCCSA only maintains sidewalk inside FCCSA landscape reserves and greenbelts, which includes the sidewalks around pool and park sites. FCCSA does not maintain the sidewalk in front of any home located on a public street.

The pruning will consist of raising the canopy of street trees to provide clearance of at least 14’ over the street and 10’ over the sidewalk. Limbs that are removed will be chipped and hauled away from the property on the same day the pruning takes place. Street trees are those located in the area between the sidewalk and the street; yard trees are not included in this service. As the trees are a living organism and are constantly growing, additional pruning may need to be done between visits. This is the responsibility of the homeowner as well as any damaged limbs that may need to be removed.

If you wish to continue to maintain your own street trees, you may do so by using the form located on our website to notify FCCA no later than two weeks prior to the beginning of the month of your neighborhood’s scheduled pruning. If you opt out of the program and later choose to join, your street trees will not be pruned until the next scheduled pruning of your neighborhood. You will need to inform FCCA in writing if you choose to opt back into the program. Also, if you choose to maintain your own street trees and receive a violation notice from the City or from FCCA, you will be responsible for bringing your trees into compliance and for any fines incurred for failure to do so.

For more information about the program you may contact Steve Spears at (281) 634-9552 or e-mail at landscape@firstcolony.org.

Tree lined streets have become synonymous with First Colony. Over the years as the trees have matured a thick leafy canopy has grown that shades many of the boulevards and thoroughfares. However with the beauty of large heavily canopied trees came numerous challenges. Diminished or no turf growth, increased siltation, damage to sidewalks and utility infrastructure caused by dense root systems, and obstructed street lighting are all common problems in First Colony. Due to over planting, an increase in competition for sunlight and nutrients occurs. As a result the weaker trees are overtaken by their healthier counterparts.

In years past First Colony Community Services Association has executed several projects to find the best solution to the issues created by the abundant hardwoods in the right of ways of First Colony. Canopy thinning, planting of alternative varieties of turf and ground cover, and planted beds of shade tolerant vegetation to name a few. In an effort to preserve the signature appearance and insure the health and longevity of the trees in First Colony, a test site was approved for selective tree removals in 2014 at Edgewater Boulevard between Waters Way Drive and Colonists Drive.

In 2004 the First Colony Community Association (FCCA) Board of Directors formally adopted a Comprehensive Master Plan (CMP) detailing twenty-nine established goals to be accomplished over the course of ten years, 2005– 2014. This roadmap helped to guide the future of FCCA and proved to be a highly effective tool.

In January 2014, the FCCA Board approved and published their Amenities Philosophy which was guided by member input. In July 2014, the Board of Directors chartered a task force comprised of Association members (24 neighborhoods were represented), developer representatives, Sugar Land and Missouri City Staff, and FCCA Staff to update the existing CMP. The CMP update was developed in accordance with the Vision Statement adopted by the Board of Directors, which is as follows:

First Colony will be recognized as a superior community is which to live, work, and play, known for its natural beauty, architectural design integrity, amenities, recreational opportunities, and consistent deed restriction enforcement.

The task force, with the help of a facilitator, Mr. Jeff Evans (Management Matters LLC), met throughout 2014 and drafted and recommended the adoption of ten goals and a total of sixty-seven actions to guide the community over the next six years, 2015– 2020. A timeline was also incorporated into the plan for each goal/action based on current or anticipated need.

Additionally, the FCCA Board and Staff also worked with Clark Condon Associates to update the FCCA Amenities Master Plan. This update was aligned with the FCCA Amenities Philosophy and included evaluations of all parks and pools, and provides recommendations and priorities consistent with the CMP Goals and the FCCA Reserve Study.

The primary message from the membership throughout this process was to continue doing what the Association is doing to keep the community a first-class master-planned community.

While most of the goals are related to maintaining current assets or enhancing existing services, some new initiatives were identified through this process. Further, approximately 90% of the projected expenses for the goals are capital and/or reserves, with only 10% impacting operating costs over the course of five years. The CMP update includes a relatively detailed financial analysis that included very conservative assumptions. The model should be considered changeable and it will be necessary to modify it over time. It is also important to note that the model is not definitive in terms of the long-term financial needs of the Association. As annual budgets are prepared over time, this model will be updated to continually reflect the most accurate information available and provide a tool for the Board and Staff in setting future assessments and funding needs.

In order to ensure the Association stays focused on the established goals, the current FCCA governance policies require an annual CMP Monitoring Report be completed by the Executive Director to the Board of Directors. This policy notes that the goals will be reviewed annually for need, priority and available funding. A more thorough review of the entire document will be done every five years and as new issues are identified, they will also be considered for incorporation into the document.

A special thanks goes to the many volunteers and Staff who dedicated a significant amount of time in developing this useful tool to help guide the future of FCCA.